The African Statistics Day (ASD) was adopted in May 1990 by the Sixteenth Meeting of the United Nations Economic Commission for Africa Conference of African Ministers responsible for Planning and Economic Development. The day is celebrated on November 18 each year in order to “increase public awareness about the important role which statistics play in all aspects of social and economic life” of our countries and the continent, but the date may change due to various reasons.

Main Objectives of the celebration of African Statistics Day:

In 2019 the ASD theme was in line with the 2019 AU one which is; “The year of refugees, returnees and internally displaced persons: Towards durable solutions to forced displacement in Africa”.

The theme was chosen to raise awareness on the critical importance of disaggregated statistics when responding to the core concept of the sustainable development goals; “leaving no one behind”, and specifically to the challenge of handling forced displacement on the continent.

Speaking at an event organized by the Economic Commission for Africa (ECA) to mark the day, Mr. Oliver Chinganya, Director of the ECA’s African Centre for Statistics, said the theme was driven by the need for greater commitment by Africa to address the plight of its citizens in forced migration situations.

The theme, Mr. Chinganya added, also recognizes the need for the continent to address conflicts and violence, natural disasters and climate change, health emergencies such as the Ebola outbreak, food insecurity and extreme poverty, and social injustice and bad governance, the main factors that lead to forced displacement.

“To address these, it requires statistical profiling that provides disaggregated figures and analyses of the displaced population. Making available high-quality statistics as a basis for comprehensive assessments and recommendations for evidence-based policymaking, which fosters inclusion and promotes socioeconomic development for the displaced people is therefore crucial,” the ECA Director said.

Eastern Africa, Mr. Chinganya said, remained with the highest number of people affected by conflicts and climate change challenges, including land degradation and desertification. It holds 59 percent of 7.3 million of Africa’s refugees and 49 percent of the 14.7 million of internally displaced people on the continent.

Mr. Chinganya said the African Centre for Statistics will continue to work with ECA divisions and sub-regional offices, including the African Institute for Economic Development and Planning (IDEP), to support countries build sustainable statistical systems, including the use of modern data collection tools.

“We also stand ready to work with other regional and international agencies including United Nations High Commissioner for Refugees to develop harmonised tools and guidelines to support the measurement and handling of displaced persons. We must make the voices of the vulnerable visible in the numbers and in the policies. Together we can,” he said.

Mr. Chinganya also spoke about the over 500 000 Africans who lack legal identity saying the scenario was critically alarming and contravened each of the continent’s human development efforts.

“Without knowing the numbers and characteristics of the residents of a country, governments cannot plan, neither can they craft adequate policies or monitor progress. This steers us further away from achieving our human development commitments as set out by the Africa agenda 2063.

Statistics Sierra Leone (STATS SL) held their African Statistics Day celebration in Makeni on the 18th of November and used the day to launch the Sierra Leone Integrated Household Survey Report(SLIHS) and raise awareness among the general populace  about the work of Statistics and the vital nature of reliable DATA in National Planning and economic Development and good governance within any state. 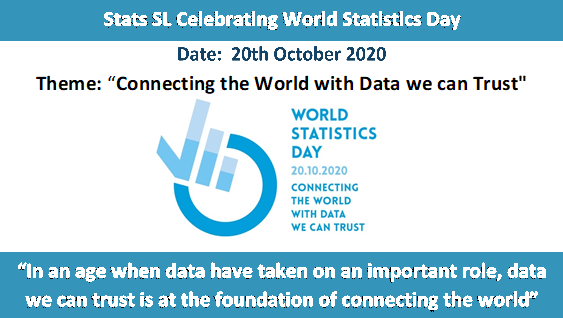 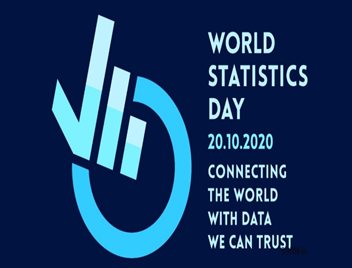