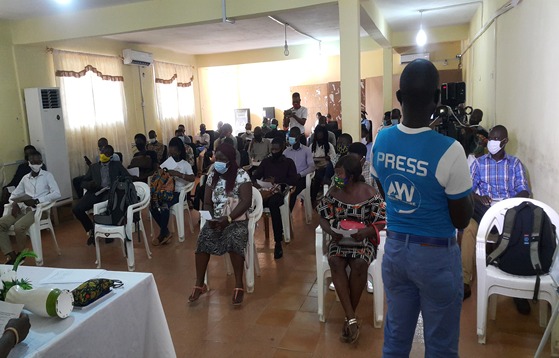 Stats SL has on Wednesday 3rd February 2021 commenced training of Cartographic Mapping Officers simultaneously in all 16 districts nationwide for the 2021 Mid-Term Population and Housing Census.

Welcoming participants, as well as Journalists from various media houses, the Chairman of the event, Director of Communication and Public Relations at Stats SL, Samuel Ansumana, said that the Training was a landmark event that kick started the actual census process.

Making a statement on the importance of the cartographic mapping, the Deputy Statistician General, Andrew Bob Johnny, emphasized the importance of the event by saying that successful candidates are very lucky to be part of the process  to be trained from among the 7 million population of the country so, they should take advantage of the training as it is purposely organized to capacitate them. He furthered on the importance of the census by indicating that it will be the first Electronic Census to be undertaken in the country, but  at the end, it will help to generate credible population and housing data Mid-way between the census in 2015 and 2025. He underscored that the main reasons for the Mid-Term census were to address challenges of the Census in 2015; rehearse for the primary census in 2025; acquire a credible population and housing data covering all enumeration areas, locality types and update base maps of Sierra Leone that will provide a credible sample frame for intra-censual activities. He concluded by categorically saying that the process will be done technologically with the use of Android Tablets and phones through an improved methodology referred to as Computer Assisted Personal Interview (CAPI). He encouraged the participants to do their best during the process because at the end, they will undertake an examination at the end of the training.

Delivering the timeline of events for the 2021 Mid-Term Census, the National Census Coordinator, Abdulai Brima said that, the training is scheduled to last for a period of one week and immediately after that the recruitment of enumerators will commence. He concluded by appealing to all participants to take the work seriously as Statistics Sierra Leone (Stats SL) and the nation are totally dependent on them to do their work accurately in order to produce good results.

The Statistician General and Chief Census Officer, delivering his keynote address and formally declaring the training open, Professor Osman Sankoh, thanked the President, H.E Rtd. Brigadier Julius Maada Bio and the Minister of Planning and Economic Development, Dr Francis Kai-Kai for their trust in the institution to conduct the 2021 Mid-Term Census. He also thanked Stats SL Council members for their tremendous support. He encouraged participants to take the training very seriously and also take advantage of experts’ knowledge in Stats SL; who are well trained and qualified, from whom the trainees could learn so much from. He admonished all participants to go out and “Bongolise” the process by doing the right thing as Sierra Leone is the third African country to conduct an Electronic Census. He concluded by emphasizing that there will be absolutely no risk to staff and respondents during the cartographic mapping exercise as all census field staff will be encouraged to observe all Covid-19 safety guidelines, and only heads of households will be interviewed to account for their dependents.

Demonstrating the required social distance, the Statistician General and his deputy declared the training formally open and proceeded to  inspect all the other training halls within Freetown.