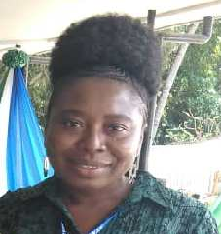 Neneh served as a volunteer primary school teacher for war affected children from 1997 to 2000 before earning her bachelor’s degree. Between December 2006 and June 2008, she was engaged as a researcher for different studies in short consultancies with various local and international NGOs, as well as government ministries, departments and agencies.

Ms. Conteh-Khali has participated in many national data collection exercises, including the 2004 Sierra Leone Population & Housing Census in which she served as District Technical Coordinator.  Her thesis, “Socio-economic and Cultural Factors Influencing Desired Family Size in Sierra Leone” is published online via the Ohio universities consortium website - “Ohiolink".