The division of Cartography and Geographic Information Systems (CGIS) was introduced into main stream Statistics Sierra Leone during the 2004 Population and Housing Census. During this time Stats SL had only three Divisions namely Economics Statistics, Data Processing and Censuses & Surveys. It was in the Censuses & Surveys Division that Cartography and GIS were housed.

It is however important to note here that the field of GIS was relatively new in Sierra Leone despite the tremendous role that the technology played in the implementation of the 2004 Population and Housing Census Project (PHC).

The most crucial aspect of census is the Cartographic/GIS field mapping exercise, because a good number of other planning exercises depend on it. GIS Technology was key to the success of the 2004 PHC. It was after the successful completion of the 2004 PHC that the need arose to split the Censuses and Surveys Division into two –: the Demographic and Social Statistics and Censuses & GIS divisions respectively.

The then CGIS division as it was formally known was charged with the responsibility of coordinating census and GIS related activities in the overall Stats SL setup. The division at that time had a core skeletal staff totaling seven including the Director and a secretary/data entry operator. Gradually the division started expanding both in terms of manpower and operations as it became the hob of the institution through the provision of technical support to other departments within the office and providing GIS related services to the wider community.

This situation continued throughout the years leading to the planning and implementing phase of the 2015 Population and Housing Census wherein the census operations was directed from this department.  The situation changed again shortly after the completion of the 2015 Census field work when the census component of the division was transferred to the Demographic and Social Statistics Division (DSSD) and the division came to be known as the Cartographic and GIS division (CGIS).

The division falls under three main sections namely: Cartography, Geographic Information System (GIS) and Environmental Statistics. Each section is charged with its specific task. It is worth noting that all these three sections operate within the GIS framework and they are interdependent and functions more or less as a single entity within the wider Stats SL context. The sections and their responsibilities are as follows:

Geographic information system (GIS) is a computer-based information system that enables capture, modeling, manipulation, retrieval, analysis and presentation of geographically referenced data. They are basically database management systems that allow the concurrent analysis of information from diverse sources, as long as they have geographic location coordinates. They also permit the analysis of spatial association between different dimensions. They allow the concurrent analysis of variables, which are observed at different levels such as infrastructure (hospitals, major roads, colleges, primary schools or health posts).

The introduction of spatial/automated maps in decennial censuses and sample surveys at Stats SL started during the 2004 PHC.  For the first time in the history of censuses, digital maps were used for enumeration for both the 2004 and 2015 PHC. Since then, the division has taken ownership by reproducing spatial maps for inter-censal surveys and researches.  With support from both government and donor partners, the division benefited from capacity building and support to the GIS lab with state of the earth GIS equipments ranging from large scale plotters to enhanced image adapted computers and Geographic Positioning Systems (GPS) machines.  As a result, smart maps of different scales have been produced for different activities.  Spatial analyses of various phenomena have also been undertaken with best results.

The division normally collaborates with other ministries, departments and agencies in their respective day to day activities that require GIS expertise. The division has in the past assisted the Ministry of Health and Sanitation in their capacity building drive in GIS. A couple of health personnel were trained and an elaborate mapping of different categories of health facilities was undertaken and subsequent spatial analysis was done. Similar capacity building venture was undertaken in the Ministry of Education Science and Technology etc.

The collaboration between National Election Commission (NEC) in the delimitation of constituencies and wards since 2006 to date. Another example is the collaboration between the Ministries of Agriculture, Forestry and Food Security, Social Welfare Gender and Children’s Affairs, the Office of National Security and Environmental Protection Agencies in the discharge of some of their activities. Also help in the capacity building of non GIS personnel both within and without Stats SL.

For the listing and segmentation processes to commence, the personnel recruited for the exercise must be trained – A training normally spearheaded by the CGIS division. In addition to the training of these personnel, each selected EA should have a map showing the enumerator or lister the location and description of that EA without which the personnel would not be able to know his or her assigned place of work. The provision and effective use of those maps is the sole responsibility of the CGIS division.

The Increasing population growth, booming economy, rapid urbanization and the rise in community living standards have greatly accelerated the need for Environmental Statistics. In the last years, a large number of research studies have been undertaken to determine inﬂuential factors affecting waste management systems in the country. Organization/institutions, usually responsible for waste management (Waste from Mining and quarrying, Manufacturing, Electricity, gas, steam and air conditioning supply, Households, Hazardous) have the challenge to provide an effective and efﬁcient system to the inhabitants. However, they are often faced with problems beyond the ability of the authorities to handle mainly due to lack of required data, organization, ﬁnancial resources, complexity and system multi dimensionality.

The Environmental Statistics Section of the CGIS Division is relatively new and is charged with the responsibility of data collection relating to the following areas:

Since this is a new Section in the CGIS Division, knowledge on Environmental Statistics is limited and therefore there is a need for capacity building to meet the challenges related to the job.

Due to the decentralized nature of the country, Stats SL also is a decentralized institution with offices and staff in all the Districts.  The functions of GIS, Cartography and Environmental Statistics staff in these Districts are more or less the same as those described above. However, these staff mainly deals with local councils and district staff of devolved ministries to carry out their day-to-day activities that require GIS, Cartography and Environmental Statistics expertise.

In addition to working with local councils and devolved ministry staff based in the districts, including NGOs operating in the districts, these staff are charged with the responsibility of daily fieldwork of map updating, facility mapping and helping to build the capacity of colleague Stats SL staff from other divisions and other institutions under the supportive supervision of a senior staff of the division from headquarters (HQ).

As explained earlier in the introduction, the division started with a few core staff but has expanded over the years due to the exigencies of its mandate and operational needs. Ideally, the following categories of staff should exist in the division: Director; Deputy Director; Principal Statisticians; Senior GIS Officers, GIS officers, Assistant GIS officers and GIS Assistants.

Currently, the division is comprised of a Director, three senior GIS Officers, two GIS officers and other middle and junior level staff.  It has a complement of 54 (fifty four) Personnel both at headquarters and the districts.  The staff cadre is based on their qualifications and experience in the office and specifically in the division.

The division is headed by the Director who is in charge of the day to day administration of the affairs of the division including directing its operations across the country.

The Director is supported by heads of sections that play supervisory roles and support the other staff down the cadre.

The CGIS division at Stats SL has tremendous success stories, due to the capacity it has both in human resources and equipment.  The success stories of this division start with the successful conduct of the 2004 and the 2015 PHC respectively. In addition to the two censuses mentioned above, the division has been able to meet all its core responsibilities in providing quality, timely and reliable GIS services to both MDAs and the general public. Below is a list of some success stories worth noting among others:

The division has a lot of products that are made available to MDAs and the general public; some for free and some for a fee which is basically on a cost recovery basis.  Some of the products include the following: 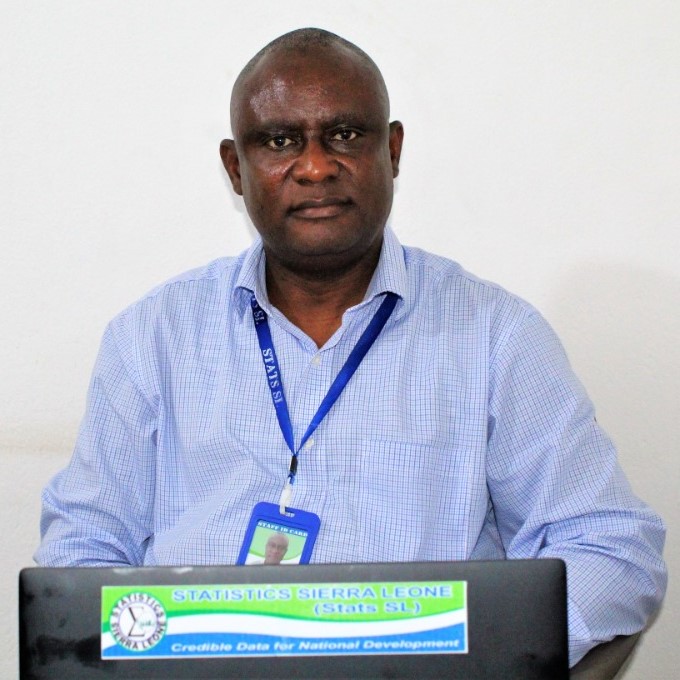